The terrain changes quickly too.. from softer sand to a corrugated compacted sandy surface that rattles everything loose enough to rattle – and loosens everything that isn’t – to gulleys, dry river beds and, for me the worst of all, rocks. The rocks, anything from tennis balls to footballs, come out of nowhere with a bone chilling crash on the bottom of car if you hit them. There are so many at times that it is impossible to miss them all (though advisable to miss the football sized ones). We have a strong protective plate under the front of the car protecting the engine and sump and it is called into action a lot. The worst is when the rock is firmly embedded in the ground with no give at all – except in the solidity of the Jag.

It is not possible to ‘tiptoe’ through the day – though aware of the general unsuitability of a Jaguar on the tracks of Northern Mongolia we are not going crazy – so we weave and brake through the worst of the tracks and then let rip on the sandy sections where we can see any upcoming obstacles (we think). We overtake a few but are still often overtaken by some unbelievably fast cars that have that extra bit of clearance – and some that don’t!.. However, we want to get to Paris. 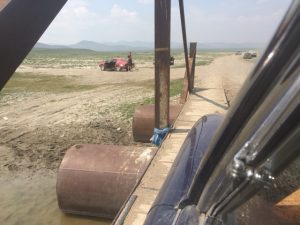 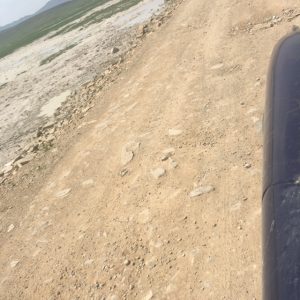 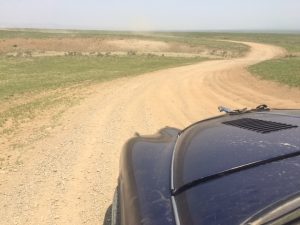