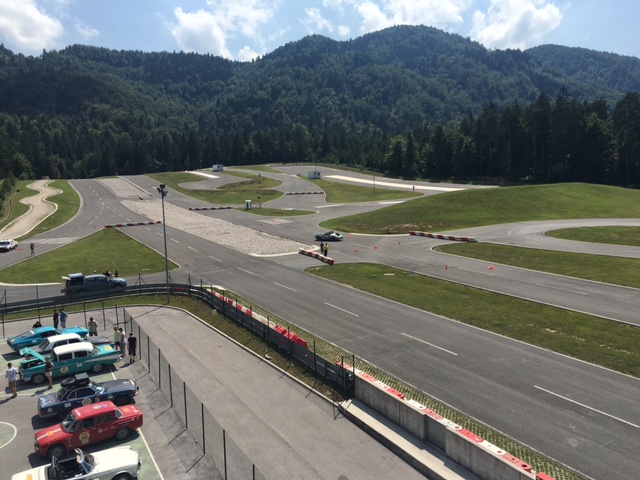 Helpfully the rally marshalls suggest different routes for a stage – ‘Friendly or Unfriendly’ – or maybe the arrows were pointing to the marshalls?

We arrive at the lunch stop and before we are able to have break there is the matter of the cones. The track is set up with slaloms, stop and go sections and a lot of pretty confusing cones. 2 seconds of instruction is probably not enough to know whether we are going round the standing cones, in the direction suggested by the lying down cones, through the gates, or just targeting as many cones as possible.

The whole thing is completed reasonably quickly as the Jag performs pretty well on the track despite being heavy and e head for lunch. This lunch thing is definitely a European thing as it is now a daily occurrence. However it is not always one we can enjoy as we are also given a check out time that if you miss results in a time penalty. While not driving wildly we are still checking the table and while finishing 21st, 22nd or 23rd is pretty irrelevant it still seems to matter a little!

As of yesterday we are 23rd, about 58mins behind the Mini of Paul and Chris Hartfield. Paul is a very experienced and good driver and is driving quickly, though Chris has suggested he temper his enthusiasm a little. Having a drink with them last night, and as our strategy for advancement is reliant totally on attrition and the misfortune of others, I did of course suggest that he push as hard as possible. Behind us, by around an hour and a half, is the silver 356 of Charbel and Walid in one of the few cars that sits lower on the road than we do. I think that Walid has replaced very piston twice and numerous other parts – that surely must merit a time penalty as they have a virtually new engine!

We are also still second in our class to the 1954 Sunbeam Alpine of David and Jo Roberts – which has a smaller engine and is older than us so thats 2 excuses gone. They have also had to replace engine bearings as often as they have had hot dinners so we can’t complain about mechanical problems either. We are over 2 hours behind them but this is entirely due to the fact that at every stage and time check Jo is out and sprinting – today even before the car had stopped moving. This is a level of dedication we will struggle to muster so they fully deserve their expected class win. 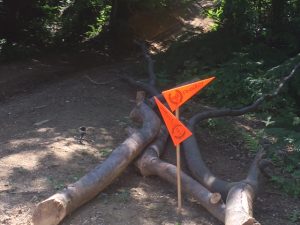 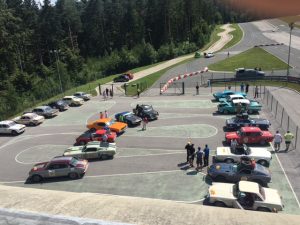 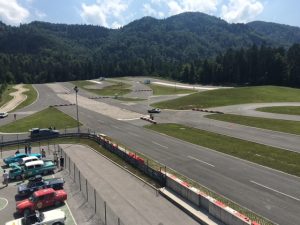 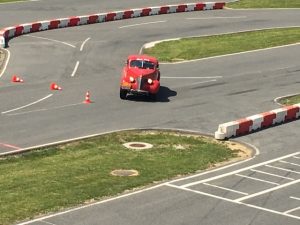