Day 23: Should have been more concerned..

Just when you think you are heading West and the hotels are getting better…!

The crews are split into three hotels in Smolensk and I am not sure we drew the long straw of the three choices. A quick check under the bed confirms that the granny that lived here is not still in residence – alive or dead.

Smolensk is one of the oldest cities in Russia and has a history of trade and war. The armies of both Napoleon (see War and Peace) and Hitler fought major battles here and while we didn’t have much time to explore there does seem to be things to see.

What we had some difficult seeing was a restaurant. Giving up on the basement buffet and heading out for a walk I tagged on to a small group and set off in search. Our choices were limited to a fast food selection and a rather bizarre Alpine / Austrian themed place that was playing Vera Lynn and other wartime staples – and it was a buffet!

Pleased to see that despite the fact that we gave up on the buffet at the hotel it hadn’t given up on us as it re-appeared for breakfast on Day24, slightly warmed over. A bread roll and a coffee will suffice I think 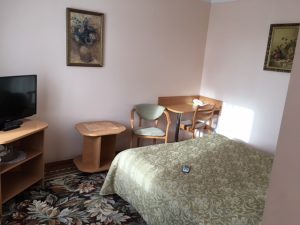 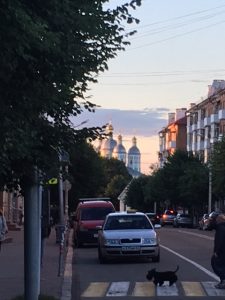