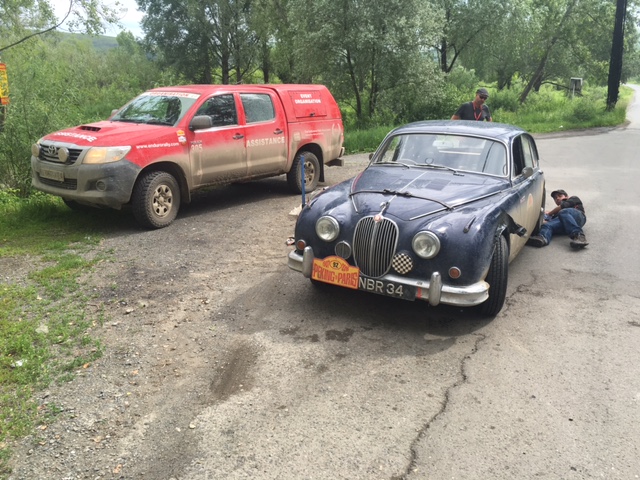 We had been quite proud that we had got this far without any roadside assistance from the sweeps. They have over 100 cars to look after and we were trying to make sure that we were not one of their regular customers. The prognosis seemed to suggest that we had hit the drain plug on the overdrive unit  (part of the gearbox assembly) and in doing so cracked the casing and caused the oil leak (gearbox and overdrove share the same oil). What this actually meant was unclear – at best we thought we could maybe seal the crack and may just lose the overdrive, at worst, a new gearbox. What was clear was that we were not going anywhere except on the back of a truck. The call was made, the sweeps moved not to their next problem and we settled down to wait – we were told an hour.

Given our rather remote location and a bridge keeper who was, I am sure, absolutely harmless but who kept wandering past  (in vest, shorts socks and open sandals) swigging from a bottle of dark amber liquid we were circumspect. The amber liquid could have been mint tea, for all the Russian that I know, but the various vans and trucks that stopped and various drivers (all seemingly muscled Putin lookalikes) that wandered in to the little hut while giving us a sidelong glance as they passed was enough to make us remember the various warnings we had been given regarding Russia. Matt and I  had been discussing as we entered Russia how it is a shame that you enter certain countries with fixed ideas about the people – it is of course only some of the people that cause these ideas to be valid but it’s not always easy to know which ones.

Without any incident the truck arrived within the hour and we were loaded for the trip to Novosibirsk. 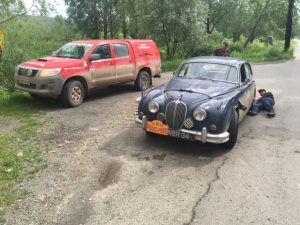 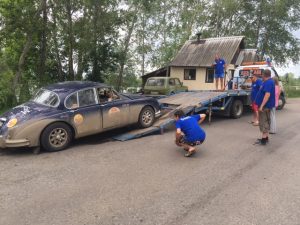 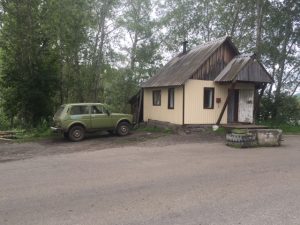